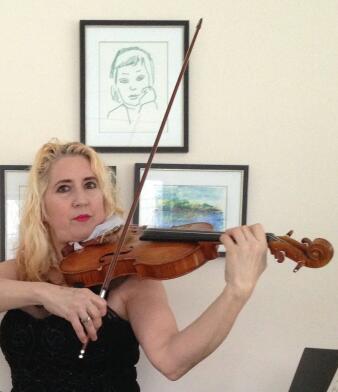 Concertmaster Lisa Toth was born and raised in Detroit, Michigan and studied privately with three Detroit Symphony violinists.  She was appointed concertmaster of the Detroit Civic Orchestra in its inaugural season, and was privileged to play under the batons of Kenneth Jean and Maestro Antal Dorati.

Several years later, it became a regional orchestra and its name was changed to the Livingston Philharmonic.  It developed into a fine orchestra, performing music from the standard repertoire to very appreciative audiences for nearly a decade.  Since 2001, Ms. Toth has also been concertmaster of the Genesee Symphony in Batavia, under the baton of Raffaele Ponti.  For several years, she was also concertmaster of the Genesee Valley Orchestra and Chorus.  In October of 2010, she was posted as Brighton Symphony’s concertmaster.

Additionally, Ms. Toth has performed as violin soloist throughout Western NY with pianists Dr. Kevin Nitsch and Sonja Shelton.  She has also collaborated with celebrated indie artists such as guitarist Gregory Paul.  Recently Ms. Toth relocated her Toth Music Studio to scenic Bushnell’s Basin, along the Erie Canal, where she teaches violin, viola, cello, and piano to more than 50 private students. Ms. Toth is the proud mother of a daughter and son who are also musicians and recently became a proud grandmother.